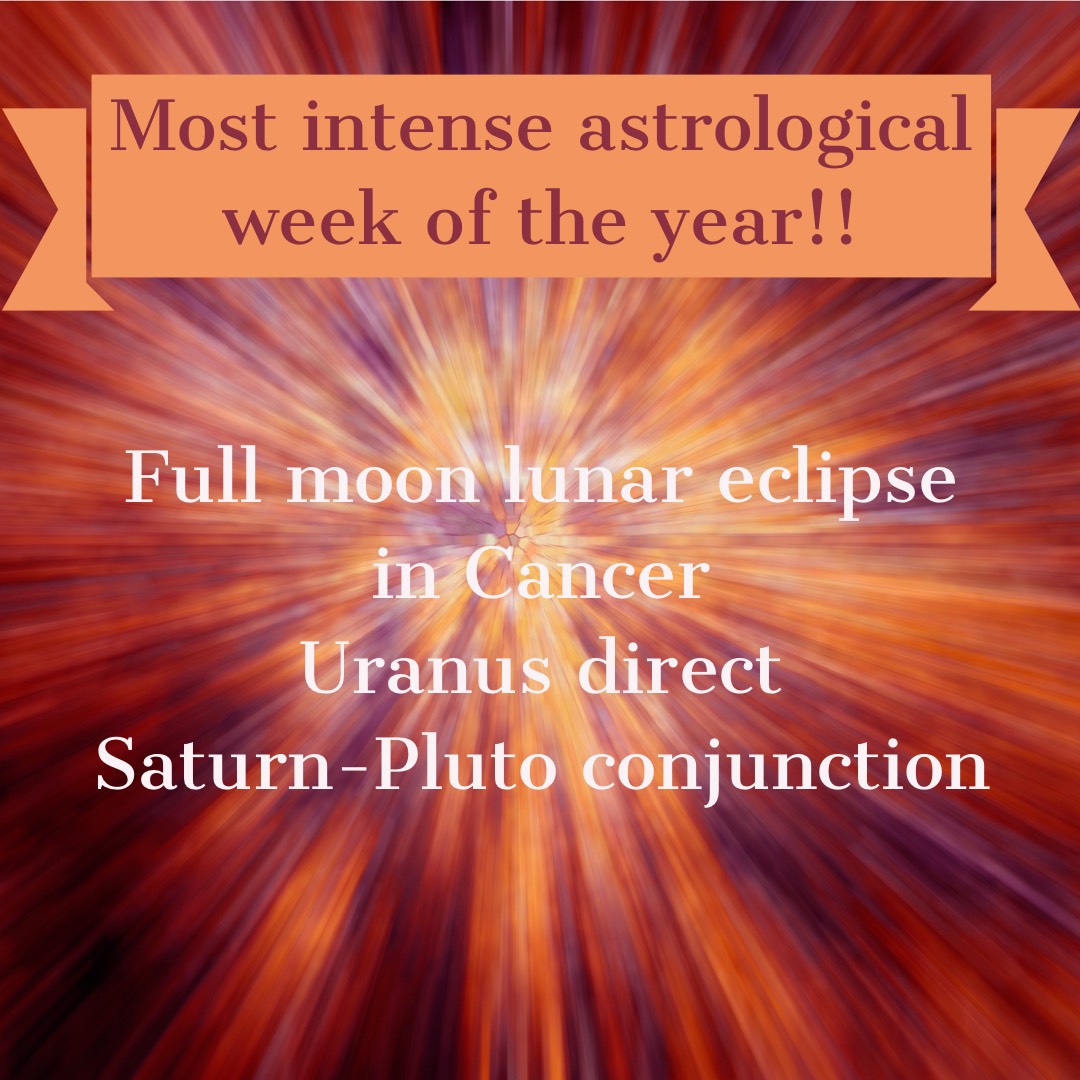 Hello and good morning/afternoon/evening! Whenever you are reading this : )

Last week was crazy - but this week is crazier! This has been a lovely introduction at least for those that I know and myself into 2020 - I brought in 2020 with some awesome community that is newly forming- this year definitely has themes of expanding and merging circles together and I'm very much seeing that in my own life now.

Last week, after we rang in the new year, we experienced a first quarter square with the moon in Aries - serving as a check point to make sure that we're headed in the right direction - if anything was rather out of alignment it would have shown up for sure, at least internally if not externally.

Mars moved into the sign of Sagittarius and our spiritual beliefs and our actions - the way that they line up - come to the forefront. Whatever house this is in will show where you're advancing major effort until February 17th.

The eclipse season is raging on - beginning with the new moon solar eclipse in Capricorn on the day after Christmas, which really offered a clean reset if we were able to take it. Eclipse season expedites destiny and change is the only constant during this time, so attempt to remain unattached to the outcome of what is going on in your life now for best results - because you don't even know where this could be leading you. Mars in Sagittarius reminds us of the bigger picture, the cosmic plan we know not of yet - the imperative through the sea of Capricorn energy is to have faith.

We start the week out on Monday with the moon wrapping up in Taurus, making trines to Saturn and Pluto as it's on its way out, gearing up for the moon coming into Gemini on Tuesday. The moon in Taurus trining Saturn in Capricorn is an overstanding of what is expected of us, what we need to do, and the moon trining Pluto shows the transformation forward of how we do it, how we get there.

Tuesday, the moon will move into the sign of Gemini, which can induce a feeling of anxiety for those that are prone to it. We can be quite scattered, but very conversational, when the moon comes into the sign of Gemini. And with every full moon but especially a full moon eclipse that we're preparing for on Friday, the intensity of the week is going to start really ramping up around now. Sometimes this energy can affect your sleep, your mood - so take extra caution that you're not projecting your own struggles onto others.

Tuesday the Sun in Capricorn will get a healing boost in the form of a sextile from Neptune in Pisces - this is just a really nice, soothing aspect to assist us in combating the craziness honestly.

Wednesday presents a huge release of karma with Jupiter, the planet of expansion, conjunct the South Node in Capricorn - this is a big push to continue to release anything that prevents you from standing in your authority, any family issues that are holding you back, maybe releasing actual external situations that keep you connected to feeling less than you are. We're releasing the need to do it all ourselves, we're releasing greed and obsession & preoccupation with control and power.

Mercury in Capricorn will be receiving that same healing boost from Neptune in Pisces, allowing our communication to be soft and compassionate, perhaps rather than terse, which Mercury in Capricorn could be described as. This will provide a little bit of a dreamy experience in the middle of the week - and any softening only helps

Thursday the moon moves into Cancer, edging towards the lunar eclipse at 20 degrees! This is the 20 degree degree interpretation from Ellias Lonsdale, genius who wrote Inside Degrees:

CANCER 20 High up on a mountain an eagle's nest. Heritage and birthright, the soul's inheritance. Being granted a belongingness, an attunement to rarified worlds. Consciousness triumphant. Maintaining the Crown vista of universal essentials, you are imbued with natural wonders and treasures. Wakeful, vigilant, and clear. You have superlative faculties of sifting through and finding what we all need to see here. Remarkably untouched by personal limitations and distortions. Called upon to uphold the truth and knowing it. Serene, focused, and unsentimental. Diving right to the place where the goods are. Impeccable skills used under constraint. The finest accompanies each breath. The mark of previous karmic attainments of the highest kind. Resuming where you left off, steady, self-assured, and righteous in the best sense. Beyond reproach."

"Wakeful, vigilant and clear" - that is a great way that we can describe ourselves after the tough work we have done in the last eight years. The last eight years have prepped us for this week - to be able to transcend what we can and to be able to see what isn't right for us super clearly. The Cancer/Capricorn axis in our chart, which is representative of security, mother/father, safety, depending on others versus self-reliance/autonomy, has been transformed rapidly over the last two years - and this week, with the full moon lunar eclipse and the Saturn-Pluto conjunction, is for us to figure out how to really move into this next phase in our lives.

The full moon in Cancer brings up emotions - I'm expecting big emotional releases on part of myself, my friends and my clients - just because there's so much intensity right across the sky in Capricorn - in fact, the full moon will oppose Saturn and Pluto, giving us another opportunity to face off against the challenges that have bound us up until now, wherever Capricorn is in your chart. This is a beautiful opportunity to use your emotions as your alchemist, allowing honest emotions to rise up to the surface so that you can see the truth of the situation, based on how you feel. The right situation won't make you feel like you have to apologize for existing, the right situation won't have you feeling inferior on Friday.

Another thing that comes up with this full moon in Cancer is a big release of an ancestral cycle - I've been talking about this for a few weeks now how we all have this huge opportunity due to the energetic lightness and the blank slate we're being granted this week, to turn right where all of our ancestors have chosen to turn left. Get your head from out of the sand if that is where you're at and come play with those of us who have chosen to face those uncomfortable and unsettling truth so we can see the reality of our former situation, our former selves, and we an get out of dodge this week.

I'm predicting a lot of situations that don't serve our highest good finally drop from our lives as the eclipse window closes out.

Also on Friday, Uranus stations direct in Taurus! Woo! This weekend is going to change everything - we've all been digging deeply into some internal change, and now you'll see over the weekend how it'll quickly internalize. On a collective level, Uranus in Taurus transit lasts 7 years (until July of 2025). This is a key piece of releasing what doesn't serve us once and for all, because Uranus in Taurus is having all of us implicitly evaluate our self-worth and our worthiness of having whatever good things we desire in life, which is a birthright that gets clouded with programming and conditional love. What we're being pushed towards is becoming so strong in our own self-worth that someone - heck, even someone you care about, could say something super mean and critical, and you wouldn't flinch because you KNOW - you know your amazingness and your worthiness of taking up space in this world. Definitely something to pay attention to on Friday as well.

The Sun and Mercury will conjunct as well on Friday and will oppose the full moon - indicating a certain level of mental busy-ness that we could get kinda lost in without realizing it - definitely don't let your mind sweep you away from where this day is leading you - get out of your head and click back into your heart, your body, your temple - which is hard to do on full moons already, let alone a lunar eclipse with the Sun and Mercury together opposing it and Uranus direct - that's a lot!

Sunday heralds the Great Conjunction of 2020! With Saturn and Pluto finally coming together to form a conjunction, this is going to be one of the most transformative days of the year. This is a serious opportunity to really give yourself to the process, to transform and to really stay conscious and aware as potentially painful realizations come up that require us to course correct. Saturn and Pluto coming together is like the "Judgment" tarot card - it's judgment day on a personal and collective level, so whatever you're holding onto that isn't alignment, I've been encouraging you to let it go for weeks leading up to this but this conjunction will definitely force-close a lot of situations that aren't beneficial for our highest and best!

This is us letting go of anything that prevents total sovereignty and seniority - all outer control in our personal lives won't hold up. We know ourselves - our truth - and that is what this is all about - what is your truth and how can your life more appropriately reflect that?

Horoscope for the week of 8.24 - 8.30 || lots of opportunities for good with some snags to watch for

Horoscope for the week of 7.13 - 7.19 || working around the obstacles and relaxing expectations